Strangers to Beckenham, arriving at Clock House Station, invariably ask "Where is the Clock?" The origin of the name appears to have come from a large turret clock which used to be on the stables of a Mansion standing on the site of the present Spa and The Studio.

The house was probably built between 1703 and 1723 for the Lethieullier family of Kent House, although there was a reference to a building there on a map dated 1623. It was a substantial, red brick mansion, a familiar landmark on the main road from Beckenham to Penge, and at one time a fine magnolia tree covered the front wall. Several pictures are in the Gallery on this site. The 1623 map of the Manor of Beckenham only survives as a 1768 copy in the British Library and the detail of the Clockhouse site is vague and might relate to the nearby Thayers or Thayres Farm. 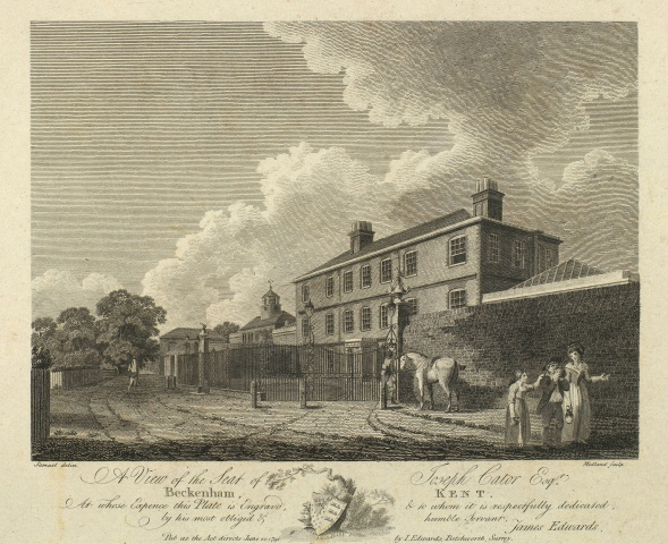 Sir Piercey Brett, "Admiral of the Blue", died there in 1781. Brett was MP for Queenborough and earlier in his life as a Naval Lieutenant was part of the fleet which Anson took to the Pacific to capture a Spanish treasure galleon making Anson incredibly rich. Both Brett and his wife Henrietta are buried at St. Georges, Beckenham. From 1782 it was purchased as the seat of John Cator's brother, Joseph Cator and remained in the Cators’ possession. Joseph and his wife Diana had several children, the eldest of whom, John Barwell Cator, would be the main benefactor of John Cator’s will in 1806. After Joseph’s death in 1818 the occupiers included John Goddard, afterwards of Elmer Lodge; E. Richard Adams, also of Elmers End and for many years Churchwarden of the Parish Church; Sir Francis Tress Barry, who inaugurated the Volunteer Fire Brigade, the last tenant being John Wallace. These were under lease from the Cator family who eventually sold the land to Beckenham Corporation for the site of the Technical Institute, swimming pool and library.

This record is in Bromley Historic Collections: Duplicate conveyance between Albemarle Cator (a person of unsound mind, so found by inquisition by Thomas Henry Burroughs) of Woodbastwick Hall, Norfolk, esquire (1st part); Sir John Farnaby Lennard and Reverend Harry Bertie Roberts (2nd part); Thomas Henry Burroughes and Thomas Allen Henry (3rd part); Henry Ashworth James and Charles Ashworth James, esquires (4th part); Romer Williams and Archibald Herbert James, 1st mortgagees (5th part); Burroughes (6th part); Williams, 2nd mortgagee (7th part) and the Council for the Urban District of the Parish Beckenham (8th part) in relation to a piece of land on Beckenham Road, Beckenham, Kent. In consideration of the sum of 5s paid by the Council to Lennard and Roberts at the direction of Cator, he (at the request of the 3rd parties and the mortgagees) conveys the property to the Council to hold in fee simple, discharged from the portions of Cator's younger children and freed from mortgages. The Council agree that the land shall be used for the purpose of erecting a technical institute and public baths for the parish of Beckenham. Includes a map of the property. Ref 989/4/2/9 dated 31/07/1899

The gardens were well wooded and in the lake or pond there stood a two-tier fountain which, on demolition, was placed in the ornamental water in the Croydon Road Recreation Ground.

It was natural that a new station on the Mid-Kent line in 1890 should be called 'Clock House', but six years later the house and most of the stables were pulled down, the clock being moved by the Cator family in 1896 to the stable buildings at Beckenham Place where it was a familiar sight to visitors to the Golf Course. The clock was destroyed along with most of the stable block in a fire in 2011 and what remains of the clock tower, the weather vane and bell, are reinstalled in a rebuilt stable block. A Makers plate and a repair or overhaul plate dated the clock to well before the building of Beckenham Place. The cast iron frame of the clock is all that remains of it.

For a time the stable remains were occupied by a livery stable keeper and later as part of Horsman's Nursery until finally pulled down in 1926.

Robert Borrowman wrote "we are told on good authority that there existed in the grounds a spring containing excellent medicinal properties, and we recall the fact that when the well was sunk for the present Baths, the water obtained was pronounced by experts to be of exceptionally good quality".

Whether true or not the house was near the river Chaffinch which becomes the Pool when it joins the Beck or Hawksbrook and several other ponds and ditches are shown on the early OS maps.

On the corner of Churchfields Road stood the public house "The Prince Arthur" which was destroyed by a flying bomb in August 1944. After the war the rebuilt public house was renamed "The Clock House" with a colourful sign, by a local resident, depicting the original residence of that name.

In April 2007 “The Clock House Public House ” was demolished as part of local redevelopment.

Note to Ian.   Cliff Watson did some research probably relating to the Technical Institute building.

An estate plan showing Joseph Cator in possession in 1782 is in Bromley Historic Collections.