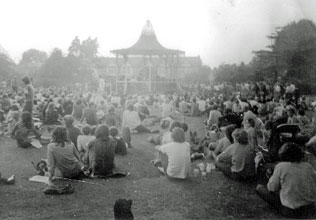 Appendix Part One were a Penge based blues band, that had become well known in clubs in and around the district and had built up a large following.

The line up consisted of Bill Leisagang (lead guitar); Neil Holmes (lead vocals); Al Lovelock (bass) and Rob Jackson (drums). The band had originally met at The Drum Youth Club and had been formed at Al Lovelock’s house in Pelham Road Penge.

The band had played at the Three Tuns in the past and were well known to The Arts Lab. Appendix had never played with any of the other artists before despite many of the other bands being drawn from the local area. They knew that the gig was going to be good but like many did not get paid for their performance. It was Bowie who booked them for the gig with couple of weeks notice.

Bill Leisagang said "it was a magnificent era to be in as a teenager. The festival was a precursor to all the big Rock Festivals that were to happen in the UK and Europe. There were no dressing rooms just a grassy field, but it was lovely weather. I had just hitch-hiked all the way from Bristol with my guitar and Marshall Sup fuzz pedal and did not have a change of clothes, my 28" crushed velvet flares split when we got off stage. It was festival chaos and Bowie struggled to keep organised, he was announcing, performing and roade-ing simultaneously. We just turned up on stage and Bowie plugged me into an AC30 and introduced us to the crowd as "Miscarriage", which was going to be our new name. There was no sound check. We had our own kit as Jacko was an early adopter of double bass drums.

We had a slot about midway into the concert and took the stage to a great reception launching into Cream’s Sunshine Of Your Love; other notable tracks included John Mayall’s Stumble, Hideaway by Freddie king and Hendrix’s Hey Joe. I think Cumus and Gun Hill were on before us, I knew some of Gun Hill because they went to Beckenham and Penge Grammar School. Our biggest gigs until then was The Drum in Penge, The Dragon in Beckenham, Exchange in Bristol and The Star in Croydon".

Why the name Appendix Part One? "IT was from an English school text book in those days psychedelia was fashionable, and we just looked at random words for inspiration, it just had to sound weird and be memorable.
I had a band called Black Box Philosophy when I was 13. We won a talent competition at the Drum Club, and Al was in the runners up and asked if I wanted to form a blues band. We then discovered John Mayall, Hendrix and Cream and rehearsed every day for hours. I still know all those Cream and Hendrix solos off by heart! We used to play regularly in clubs and used to push the equipment down the street as we were to young to drive. I had to keep all this rock band stuff from my parents, who wouldn't approve!"

"Another anecdote; A few weeks after the BFF David had been off the scene, there was a report that he had been seen at the Prompt Corner cafe in Beckenham in women's clothes or something like that! A week later I had a call from Neil Holmes saying David wanted to see me regarding a new band he was in the process of forming. I got on the back of Neil's rusty moped and headed off towards Haddon Hall. This was very plush compared to the last pad he had. I assumed he must have had some advance from a Record company. David mentioned me getting involved with a project involving a girl guitarist and Tony Visconti. There was some mention of wearing female clothes. It must have been the catalyst for The Spiders from Mars! Needless to say I made a BAD career move, and turned it down (not because of the dressing up, but because I was just starting at college in Bristol, which was 90 miles away. needless to say I never completed the course!!" 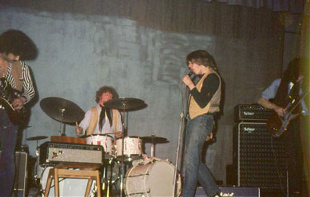 Bill Leisagang said he knew Bowie fairly well at the time, we used to go round to the flat he shared with Mary Finnegan in Foxgrove Rd and jam, then we became early adopters of the Arts Lab. Neil, our vocalist was very friendly with David, he gave Neil a load of records inc Buddy Miles Expressway to your Skull and he also gave him a white sax.

Bowie used to get people up on stage to play or do mime, or do their own thing! One day he gathered a bunch of us 16 yr old hippies and took us into Beckenham Place Park - where we re-enacted various scenes from Lord of the Rings! A light aircraft was circling overhead and kept hovering, so David got us all to form a gigantic V sign to tell the pilot to 'F' off!

He was planning on a procession down Beckenham High St with everyone dressed as giant penises, as well as a street fair to coincide with the festival. The people involved were Neil Holmes, Chris Redwin, Mick Udell, Steve Jeffries, Pete Legon, Amanda Jennings, Judy? Larry Frane, Spud Murphy and Bob Bland. Unfortunately this is a tragic list as most of the people here have passed into another world. I miss them dearly.

Soon after The BFF Bowie played in Bristol at the Colston Hall as warm up for Humble Pie and I went to see him to say hello before the gig. He said "oh are you on the bill too?" "I wish”. But No” anyway he had a test pressing of Space Oddity which he dearly wanted to play to Steve Marriot, and asked if he could borrow a record player, David and I bowled over to my flat in Bristol in the tour bus (' transit van’) and I lent him my mate’s trusty Dansette. After the gig we went backstage, to find everyone had left, but Steve Marriot had done a Pete Townshend on the Dansette, which lay in little pieces over the dressing room floor! I’m sure David was not a party to this. He was more arty and less rock n' roll than humble pie!

Quite a few years later (1987) I ended up on the same bill as David Bowie at an open-air festival in Hamburg. David was headlining with his glass Spider stage. I was looking forward to meeting him again, but he was surrounded by so many security guys whilst doing the soundcheck, it was impossible to get Anywhere near the guy! It didn't even help that David's tour manager was on our US tour for 2 months, He couldn't swing it that I could have a brief chat about times in Beckenham. I just wanted to make David aware that half the people that frequented the Arts Lab had passed away. Unfortunately not a happy ending to the Arts Lab and festival vibe that we had back then. I managed to survive thankfully as my family had moved to Bristol, which was more conservative than London at that time. 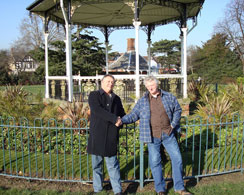 At a reunion at The Bandstand 2008 Al Lovelock said that he had borrowed an amp from Bowie on the day of the Festival but blew it up and nobody ever knew who it was. We stayed for the entire concert and enjoyed every minute of it, we probably went for a pint in The Robin Hood afterwards.

Despite many interesting leads that resulted in dead ends Appendix lasted for about 2 years. Al continued to perform and went on to play at Donnington Park. He spent several years doing gigs while touring America.

Rob Jackson said he remembered Bowie playing but never thought that he would have gone on to be as big as he is today. Rob also mentioned that after the Festival he had an audition for The Herd, a band that featured another local performer and Arts Lab member Peter Frampton. Rob managed to get to play four tracks at the audition but lost out to Henry Spinetti.

Bill Liesegang joined Nina Hagan at Rock In Rio in 1985 and played to 500,000 every day for 12 days with Rod Stewart supporting, then Nina supported Queen, this can be seen on you tube. See it on Bill's website. 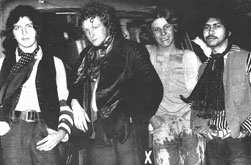 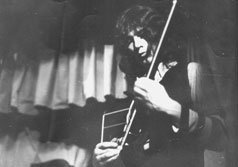 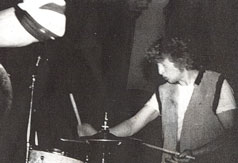 In 1970 the band had a big break when they appeared on the same bill as Jimmy Witherspoon at Bromley Technical college "It was fantastic", said vocalist Neil Holmes, "we never dreamed that we would ever appear on the same stage with someone as big as Jimmy Witherspoon". The group had been plagued with bad luck. Their agent failed to get them any bookings and had sent them along to fake recording sesions. The band also played at The dragon in Albemarle Road.

The Appendix pages are dedicated to the memory of Neil Holmes and Rob Jackson.